What is Banko-yaki or Banko Ware? 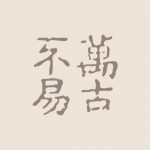 Banko ware is said to have its beginnings in the mid-18th century when a wealthy merchant named Rozan Nunami built a pottery kiln at his home in Obuke (present day Asahi in Mie Prefecture) and started making teaware on which he would mark the words “banko” or “banko fueki” (meaning “eternal” or “unchanging”) ) in the hope that his works would last forever and be enjoyed for generations to come. His works became famous as Banko ware.

In present day, while products such as heat-resistant earthen pots and traditional teapots are produced as hallmarks of Banko ware, the brand also includes a wide-variety of products from dishes to industrial ceramic molds.
Although the area didn’t have much resources for pottery, Banko workers have preserved and passed down the traditions for 300 years, by developing skills and creativity. 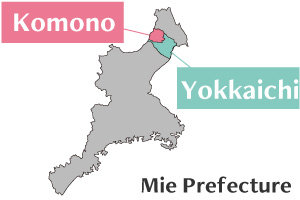 Banko ware had grown to be one of the main industries in Yokkaichi and Komono area, and also had become one of the largest pottery producing locals in Japan. There are more than 100 Banko-related companies in the area today.

The Beginning of Banko Ware 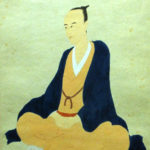 The founder of Banko ware, Rozan Nunami was born as a son of wealthy merchant in Kuwana in 1718. He devoted himself to Chano-yu(tea ceremony) since he was a little child, and build his own kiln to make Chano-yu related ceramics. It was somewhere between 1736 to 1740.
Rozan was also a highly-educated person. He developed unique ceramics by mixing exotic essences into traditional tea-ceremony style.
His works soon became popular and his fame reached to Edo(present Tokyo) where Shogun lived. Rozan opened a kiln in Edo and achieved Shogun’s patronage.

Rozan stamped “Banko(everlasting, eternal)” or “Banko Fueki(changeless) on his works with his wish that his works would be handed down to generations and last forever. Rozan’s works are called “Ko-Banko(Old Banko)”.

Rozan died in 1777. He didn’t have immediate successor and the history of Banko ware paused for while.

It is said that Rozan had learned pottery making processes from the legendary potter of Kyo-yaki, Kenzan Ogata. He started from imitating fine ceramics throughout Japan and abroad. It was also the time when Dutch studies flourished in Japan after Shogun Yoshimune Tokugawa lifted the ban on importing Western books. The intellectuals of the day, including Rozan, yarned for foreign cultures. He boldly put exotic essences into his works: “akae” enameled fabric patterns, ewers, decoration with Dutch alphabets and rare animals at the time such as lions, giraffes, and elephants.

Decades after Rozan’s death, Mori brothers, Yusetsu and Senshu, opened a pottery kiln in Obuke for the revival of Banko ware.
The brothers not only replicated Rozan’s works but also added at the time and invented new Banko ware known as “Yusetsu Banko”. One of their remarkable inventions is “Kata-banko.” It was a teapot making technique using wooden molds, which made it easer to make. Another well-known invention is “Shoenji-yu”, a bright pink glaze, which was quite unique at that time, consisting a small amout of gold.

Gotten a hint from the wooden mold for making lanterns, Yusetsu devised “Kata-Banko”, teapot-making technique that used adjustable wooden molds. A “Kata-Banko” teapot is made by sticking thinly stretched clay on a “kata”, or mold which can be disassembled into a core rod and several pieces around it and removed after forming a vessel. In this way, teapots can be very thin and light. Yusetsu added various details, such as “Mai-Tsumami” that is a rotating handle of the lid, and engraved a water dragon pattern on the mold and appears inside the teapot, and “Yukan” a circle charm attached to the handle.  ”Kata-Banko” became very popular as a souvenir among the travelers on the Tokaido, and the lord of the Kuwana domain at that time also encouraged its production.  In addition, “Kata-Banko” was spread to other areas in Japan, and rooted in those areas as Nihonmatsu Banko (Fukushima Prefecture) and Ashikaga Banko (Tochigi Prefecture). 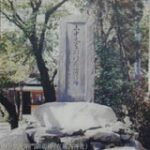 Chuzaemon Yamanaka, an local officer of Suenaga Village in Yokkaichi, admired Yusetsu’s Banko-ware, especially his “Kata-Banko”, and was hoping to introduce it to his village in order to save the poor. Located between two big rivers, Kaizo River and Mitaki River, Rice fields in Suenaga Village were damaged by frequent floods. Most of the villagers were impoverished.
Chuzaemon stood up for them. He opened a kiln in Yokkaichi and started experiments for mass-production of “Kata-Banko.” After 20 years of try and error, Chuzaemon finally established a process of mass-production and introduced it to the village. He would give the villagers tools and clays to make “Kata-Banko,” and trained them at his own expense. It was a beginning of “Yokkaichi-Banko.”
Since he was also willing to introduce it to the public, many people stated to gather Yokkaichi to learn the process and gradually formed communities of skilled potters and its wholesalers. With Yokkaichi Port and railways being developed, Yokkaichi Banko ware were sold throughout Japan and exported to the western countries. It had grown to one of the main industries in Yokkaichi, where become the manufacturing center of Banko ware. 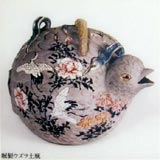 Yokkaichi Banko in Meiji-era were made of local white clay from Mt. Tarusaka and Hazu district. But it didn’t take long time to exhaust the clay. By the time of mid Meiji-era, iron-rich clay was developed which later became famous as “Shidei,” the purple clay, of Banko ware.

Then in the early 1900s, the Japanese economy was in the depression, and Banko industry was no exception. In order to vitalize Banko industry, Torajiro Mizutani started his experiment on a new ceramic ware. After years of hard work, he developed semiporcelain-based tableware named “Taisho Ware.” Taisho ware had off-white color finish and warm atmosphere, which became very popular. It also had a benefit for manufacturers since its firing-temperature was relatively low and able to save fuels. Torajiro widely shared the information on Taisho ware within Banko industry. Taisho ware was mass-produced for domestic consumption and export to the Western countries. Introduction of semi-automated wheels and plaster molding accelerated mass-production. Banko Industry as a whole come to life again. 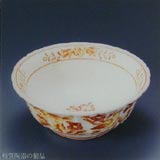 In the early Showa-era, ironstone ware was developed by Masujiro Yamada.  As Japan proceeded to the World War II, export to the West was stopped. Banko industry was severely struck by the change since more than half of Banko output was exported to the United States at that time. Domestic consumption also went down. The Federation of Japan Pottery Manufacturers’ Co-operative Association began to assert control over the production and sales of ceramic product to prevent oversupply.
During the wartime, Banko industry shifted its production to heat-resistant bricks and “substitute ceramics” which substituted metal products, such as buttons and kettles. Later in the wartime, Japan lacked metals for weapons and aircraft, and collected every metal items throughout the county.

Yokkaichi was severely bombed and more than 10,000 homes were destroyed and 50,000 people were fell victim to the bombing. More than 80 percent of Banko facilities were also burned to the ground.
After the end of the war in 1945, the war-torn country was gradually rebuilt, so as Banko industry, which was also encouraged by resumption of trade.
Various Banko-yaki items are being used inside and outside of Japan today. Teapots, flower vases, earthen pots and other highly-heat resistant items, Banko workers has been developing new products captured the needs of the time and places.

In 1979, Banko Ware was designated as a Japanese traditional craft, “Yokkaichi Banko-Yaki”.

Established in 1998 by Banko Ceramics Promotion Cooperative, Banko no Sato Center has been an information center oF Banko-ware. It consists exhibition rooms, pottery studio, shop, Japanese restaurant and rental rooms. Various seasonal events, such as Banko Ceramic Festival and Banko Ceramic Competition, are being held throughout year.

Banko Donabe(earthen pot/cooking vessels made of clay) is the best in both quality and quantity in Japan, which accounts for 80% of all donabe produced in the nation.
In 1959, Banko industry developed highly heat-resistant clay consists of Petalite. The new Banko Donabe has widely spread throughout Japan and also being exported. Banko-ware manufacturers has been developing new heat-resistant products that suit lifestyle and technology today.

“Magical” Cooking with a Banko Donabe

Cooking with a Banko Donabe, you’ll experience almost new taste with everyday recipes. Banko Donabe, made with highly heat-resistant clay, slowly builds up heat and distributes that heat gently. It also works to maximize the sweetness and “UMAMI” of the ingredients. Since Banko Donabe keeps the heat and cools down slowly, it keeps cooking with residual heat for certain time even after the heat is turned off.

In the late Edo-era, the culture of drinking green tea using teapots had spread to the general public in Japan. Producers of “Kata-Banko” teapots had promptly caught the trend, which had contributed the development of Banko ware. Since then, many kinds of Banko teapots are being produced. Some had delicate curving and paintings, others had whimsical faces allover the vessel. Today, “Shidei-Kyusu”, a purplish dark brown teapots have become one of the major Banko products. A “Shidei-Kyusu” is made with high-iron clay, and some studies show that the iron reduces the bitterness of tea by absorbing Tannins in the tea-leaf, and bring out “Umami” taste. In 1979, Banko-yaki, mainly its teapots, are designated as a National Traditional Craft.

Mie prefecture, where Yokkaichi locates, is the 3rd largest tea producing area in Japan. Yokkaichi is famous for its “Kabuse-cha”, a type of green-tea which were covered with cloths for a few weeks before picking in order to make the tea mild. It is a quite unique for a city to produce both green-tea and teapots, and of course, Kabuse-cha and a Banko teapot are the perfect combination.

Making a Banko Teapot -Movie- (Only in Japanese)

This movie shows how to make the perfect cup of green-tea using a Banko teapot.

In 2018, we had celebrated 300th birth anniversary of Master Rozan Nunami. 20years later, there will be another 300th anniversary year of Rozan’s opening of his kiln. Banko Ceramics Promotion Cooperative defined the period between the two anniversaries as “BANKO 300th” to focus on promoting Banko-ware and to pass 300 years of its history and tradition to the future generation.

Following are publications of Banko Ceramics Promotion Cooperative.**Sorry, only in Japanese. 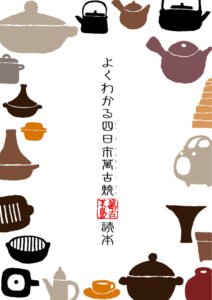